The building is the result of the first ASA workshop in the Lecco Campus, coordinated by prof. Manuela Grecchi, where 27 students, selected among the best university students of Politecnico di Milano from the Architecture courses, were asked to develop the concept for a new modular unit to be installed into the Politecnico Campus. The main request of the project brief was to design a modular unit for study or other functions that could be installed around the campuses of Politecnico. Another challenging aspect to be taken into account during the preliminary design was the possibility to partially supply the energy need for heating, cooling and lighting by the onsite energy production through the exploitation of the natural resources. 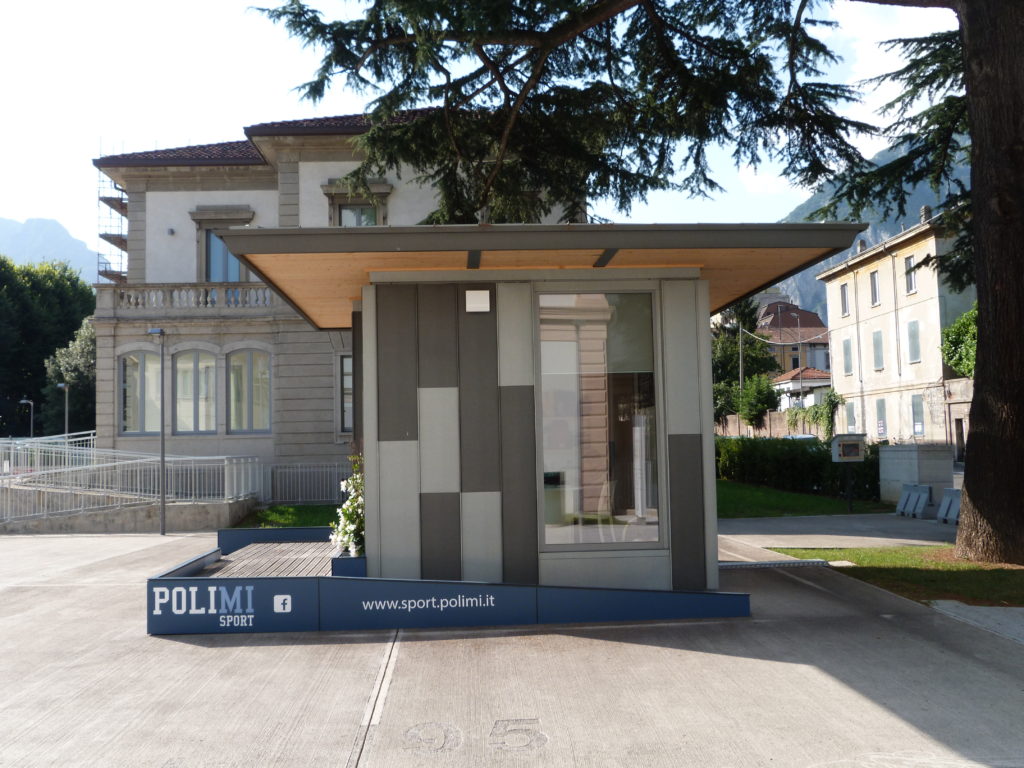 The two winning proposals, “Playrope” and “The Cube”, that achieved the first prizes ex-aequo from the final jury of the workshop, were melted together in C-ASA (Construction of ASA) by ATelier2 – Gallotti e Imperadori Associati and Ri-Legno, the two design studios in charge of the executive design and construction of the building. Due to the contribution of several sponsors, which supplied building products and the onsite installation, the duration of the construction was particularly short and the building was completed in just few weeks. 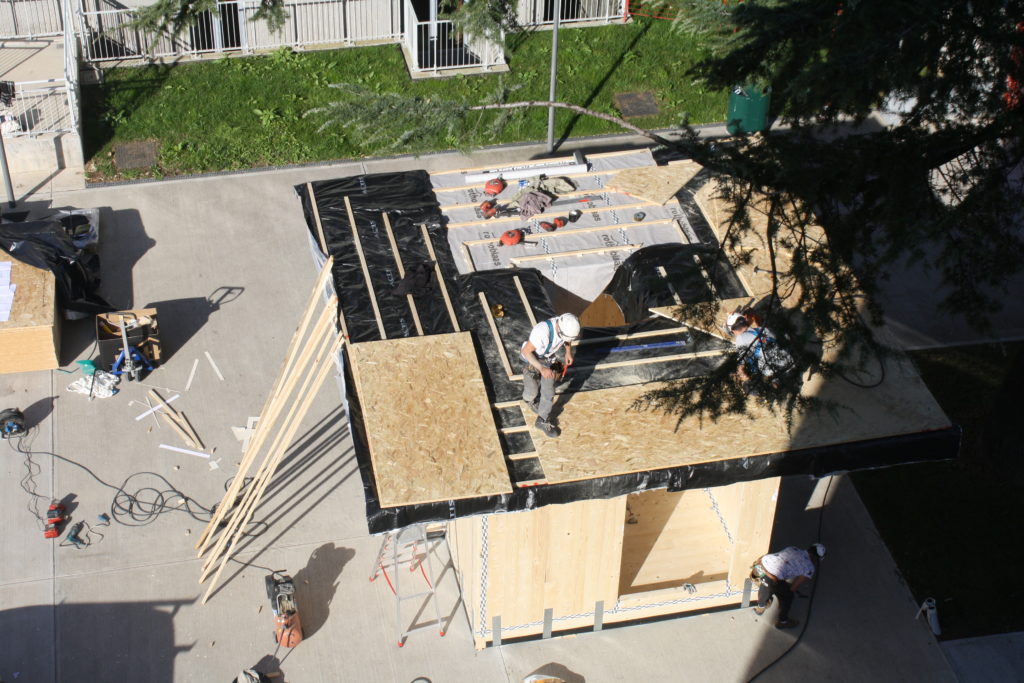 The shape of the building is relatively simple: a cube with a floor area of about 12.5 m2 and a volume of roughly 37 m3. The structure was totally realized with wood using CLT panels, which were assembled and connected on site on the existing concrete basement. Basically, the structure was designed to be modular and replicable through the aggregation of several units, able to generate spaces of various sizes. Moreover, the module was designed to be adaptable to different contexts (surroundings, climate, availability of solar energy, etc.). The internal space is flexible in order to change the internal layout on the based of the expected activities (office, study area, exhibition space, retail, etc.). 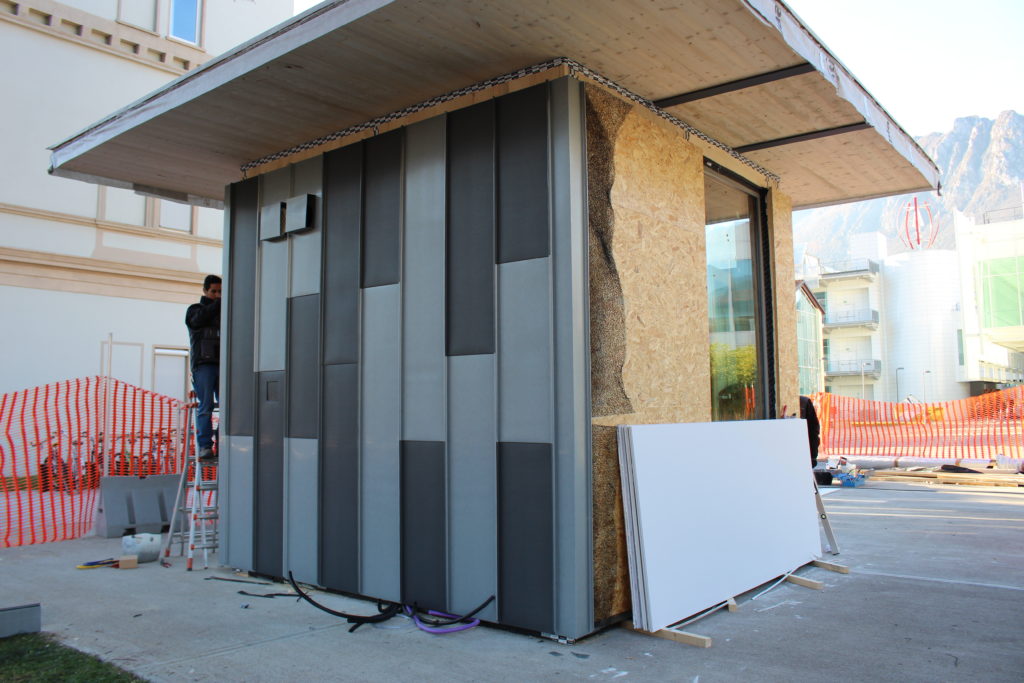 The envelope was designed according to the “fabric first” principle, adopting innovative and energy-efficient technical solutions. A lightweight dry wood-based construction system was adopted in order to ensure the rapidity of the construction and minimize the load on the basement. Moreover, a lightweight load bearing structure can be easily disconnected at the end of the building service life and reassembled for a new life in other sites. The massive CLT panels adopted to realize the walls and the flat roof, provide the thermal capacity to minimize the overheating during the summer. Moreover, a multilayer reflective insulation produced by Actis was installed internally in order to increase the capacity to store the energy during the winter. Only in the roof, considering the high exposition to the solar radiation during the summer period, an additional reflective insulation layer was installed outside, before the ventilated air gap. A suspending ceiling with mineral insulation panels and perforated gypsum plasterboards by Knauf increases the energy performance of the roof, as well as the acoustic quality of the space. The airtightness and the vapor control is ensured by the Rothoblaas membranes, which were installed on the both sides of the timber structure. The external cladding, both for the walls and for the roof, was fully realized with zinc-titanium thin panels by Zintek, which, through a combination of two different colors, gives a shimmering aspect to the whole structure. 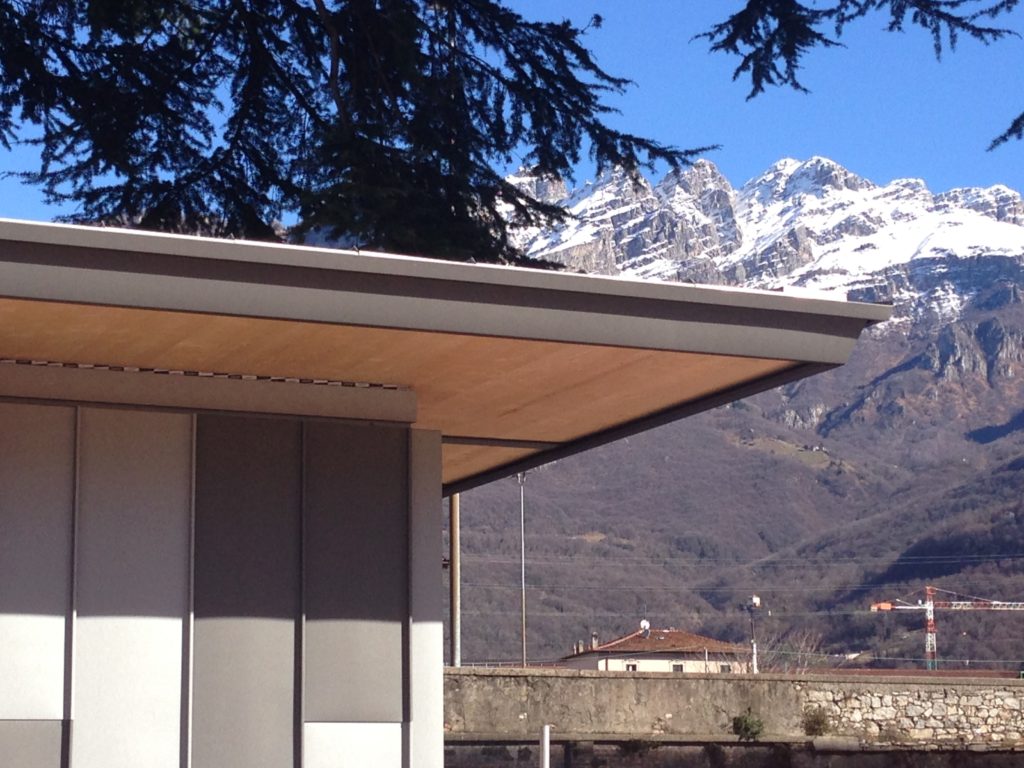 The shape of the building, as well as the orientation and the percentage of transparent parts, was modelled in order to optimize the energy balance during the seasons. In order to achieve a good level of comfort, a proper balance between transparent and opaque parts was necessary, ensuring the maximum inflow of natural light. The installation of wide windows and transparent door by Internorm allows an excellent level of diffuse illumination by decreasing the use of the artificial light, as well as ensuring an interesting views of the surrounding environment. Moreover, the high thermal performance certificed by Internorm, leads to a significant decreasing of the energy loss by transmission, with a significant reduction of the energy needs for heating and cooling. The shading of the interior spaces is also guaranteed by the cantilevering roof that, with a surface of 36 m2, protects the exposed facades from the direct sunlight. In the middle of the roof, a wide roof window by Velux was installed in order to increase the quality of the light inside the building. The window can be totally opened and shaded during the summer months in order to activate a natural ventilation, and totally closed during the wintertime.

A solar canopy close to the building area was realized with a metallic framed structure. Nine modules of PV panels (3 kWp) were installed on 6 m2 of the roof and connected to the urban grid. The PV plant partially supplies the electric energy need, decreasing significantly the primary energy need of the building. The HVAC system designed by Ing srl ensures the thermal comfort and the proper air change through an automatic regulation of the thermal power and the velocity of the fan on the base of the external and internal climatic conditions. 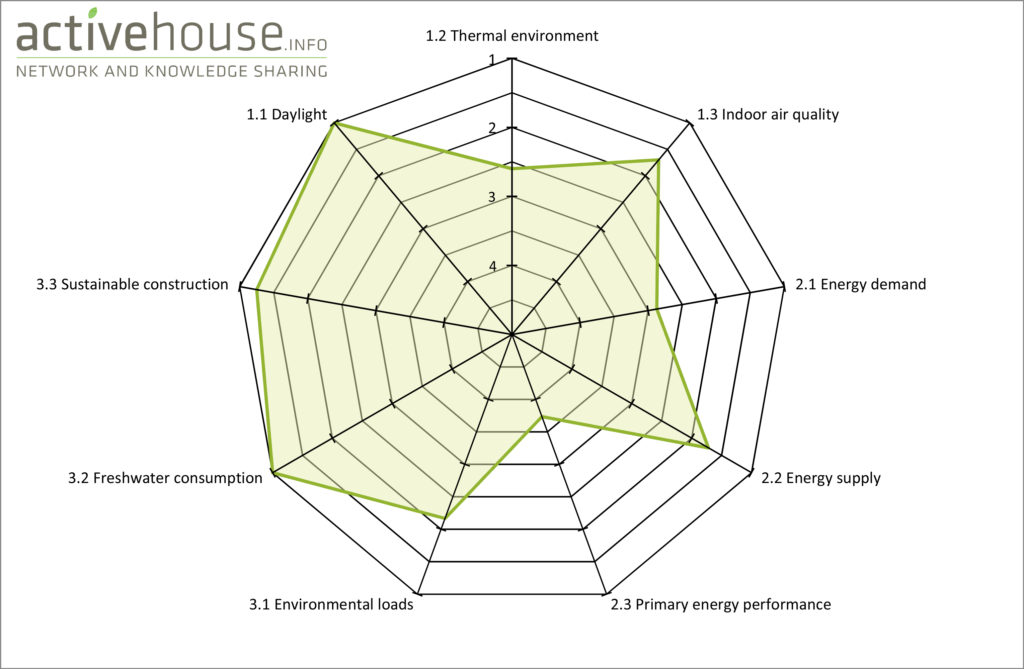 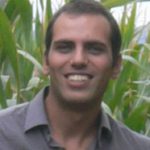 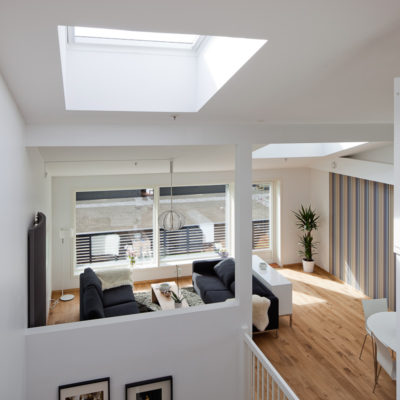