Keep it simple and cheap – and become active!

completion: 5/2014 architect: Kinga Petrás
Building a wooden-frame house, together with a sizeable photovoltaic system will result in an active house with better energy budget than a passive house.

A 7.3 kWp photovoltaic grid-connected system generating a 7.8 MWh per annum (simulated, but the conditions are near-ideal, no shading of the solar panels and the are facing almost completely South)

Total consumption of the house: 7,5 MWh per annum.

Space heating is divided into 6 airspaces, controlled by 6 programmable thermostats (bedrooms don’t need heating during daytime, while the living room heating is off nighttime) The other thermostats are also set to a program according to the family’s daily routine.

Water heating with 2 electric water boilers (a small one for the kitchen and a larger for the bathroom).

Owing to the building materials wood and plasterboards, the indoor relative humidity almost never exceeds 50%, typically being between 30% and 45%.

In the heating period temperature is generally set to 21°C during daytime and 19°C during the night. No AC is installed.

Owing to the wooden-frame structure, the house has a somewhat lower sound insulation.

The house is built predominantly of wood, which makes it an effective CO2 storage. Most of the basic building materials are recyclable and non-toxic. Owing to the large South-facing windows, no heating whatsoever is needed when the sun is shining.

There is a double water supply. A regular water supply from the city’s water grid and a second one from a well on the plot, with a water pump. The first (drinking) water supply is used in the kitchen while the second supplies water for washing, toilet, shower and the garden’s watering. There are a few taps through which these water sources could be directed as need demands (in a case of water utility failure the own water could be used in the kitchen or if a problem arises with the own well, the drinking water could be directed to the bathroom).

In Hungary passive houses are few and far between. Active houses even more so. However, there is a definitive and increasing interest in these new technologies as the environment-awareness is growing and solar prices plummet.

Passive houses, however, have a number of well-known disadvantages. First of all, they don’t come cheap. Therefore, when a few years back I was pondering my possibilities for building my own house, and thinking of building a passive house, I had to take into account the different options which were open to me. I thoroughly read wads of information found on the internet, leafed brochures and even visited some passive houses. The result was disheartening. Passive houses were expensive, needed an overwhelming amount of spicy technology built in and… well they all seemed ugly to me… While I readily admit that this latter aspect is purely subjective and individual, even this alone meant a no-go sign for me. Beyond being expensive and visually less attractive (for me), there is a further disadvantage that has to be taken into consideration. The technology that makes a passive house run is staggering. It needs lots of piping built into the structure for an optimal airflow, heat exchangers, pumps, switches, controls, vents and shafts and whatnot. This poses the evident outlook: a heightened risk of malfunction, higher servicing costs and shortened lifespan. At least, when compared to the systems that almost completely eliminate wear and tear by getting rid of moving parts.

In the terms of the costs I did some serious math (which came hard to me not being involved in this branch of science) and based on the offers presented to me by a several dozen companies I arrived to the following conclusion:

This latter, when equipped with a pretty big photovoltaic system for covering all the energy need the house demands, would be around 1.1.

This calculation led me to the question: what if we didn’t focus on trying to keep the heat in the house but instead we tried to harness the sun more intensively. That is, the emphasis would be shifted from insulation to the energy production. No complex machinery, piping, pumps and ventilators and heat exchangers, but a massive row of solar panels on the roof.

A new series of calculations followed. The answer was a hearty “yesss!”. The calculations proved that the idea was viable and sound.

If I chose this way, all the energy (including the heating) could be provided by the oversized photovoltaic system and I am exempted from the servicing costs a sophisticated system would entail.

So that’s the way I went.

The house, in appearance, has a completely traditional shape, with a net area of slightly under 100 sqm. Apart from the water and electricity no other utilities were installed. It has an elongated shape with one side facing South (this is where the large windows are). The walls are 25 cm thick, packed with mineral wool and different sandwiched layers of humidity-barrier or permeable foils, The outside has a 15 cm polystyrene foam insulation, the ceiling has a 40 cm mineral wool insulation and the floor is sporting a 15 cm polystyrene foam. The outer walls’ have a chipboard lining in the interior, this latter providing support for the fire retardant plasterboards. The heating is provided by multiple strips of heating foil integrated into the ceiling (covered by plasterboards). There is a wood stove for emergency purposes and for mood, that alone is able to heat the whole house when the internal doors are all open.

Cooling is done with shading. With the insulation built into the walls this proved to be enough at this latitude.

The solar system has a total built-in capacity of 7.3 kWp (28 panels of 260 W each) with SolarEdge technology that makes the potential subsequent enlargement easier to be carried out. It is a grid-connected system with a SolarEdge inverter. Sadly, in Hungary there are no incentives for green power generation apart from that the power company is required to accept the surplus power generated and sells back to you at the same price when you need it. If over a year you produce more energy than you can use, the power is bought at such a low price that it renders this kind of investment moot. That is, there is no reason to produce more power than our annual need.

The reason for sharing this with you:

I am convinced that (at least in Hungary) it is possible to build a house that has better energetic characteristics than a passive house. This way the house faces a lower risk for defects while still being in the range of affordability – costs much less than a full-fledged passive house and you can get it for the price of a traditional brick house. Of course, the house will be missing all those shiny machineries in the basement that achieve an ultra-efficient heat exchange and providing a continuous filtered airflow, but hey, you don’t have to worry about having those because you have plenty of electricity to heat your house. And you can open the windows anytime to refresh the indoor air.

The house was designed by Kinga Petrás, an architect in Szombathely and was built by the Novodom Kft, a company also operating off Szombathely. 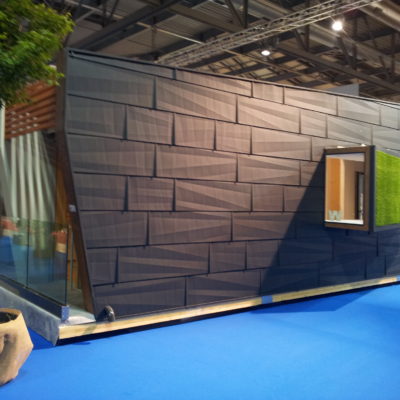