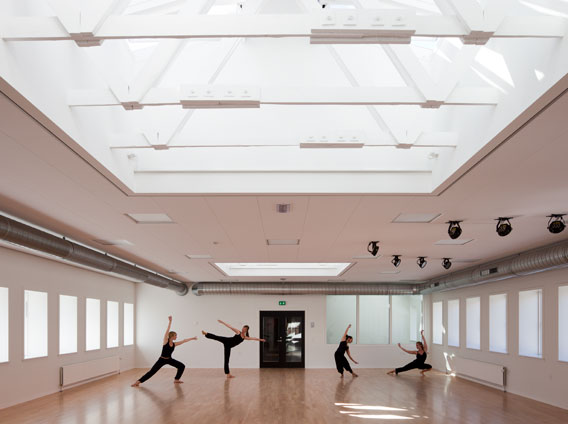 To reduce CO2 emissions and optimise energy performance, it was necessary to consider the building as a whole, not just the sum of its components. Energy efficiency was incorporated into the very design of the building and the available natural resources, such as sun and wind, were be to exploited to a maximum. For instance, windows were from the start considered as energy contributors. They are placed strategically to allow for solar heat gain and optimum natural ventilation; and different types of windows are used for North and South facing installation.

In the Osram Culture Centre project it was decided to use the super low-energy panes in the north facing VELUX roof windows and a standard energy pane for the south oriented windows to allow maximum solar gain into the rooms. A flexible building envelope prevents overheating and possible glare in peak periods and, therefore, roof windows have been fitted with electrical awning blinds, controlled either by the users or by the fully automatic control system NV AdvanceTM from WindowMaster. Solar collectors can provide up to 70% of the energy required to produce the centres hot water needs. 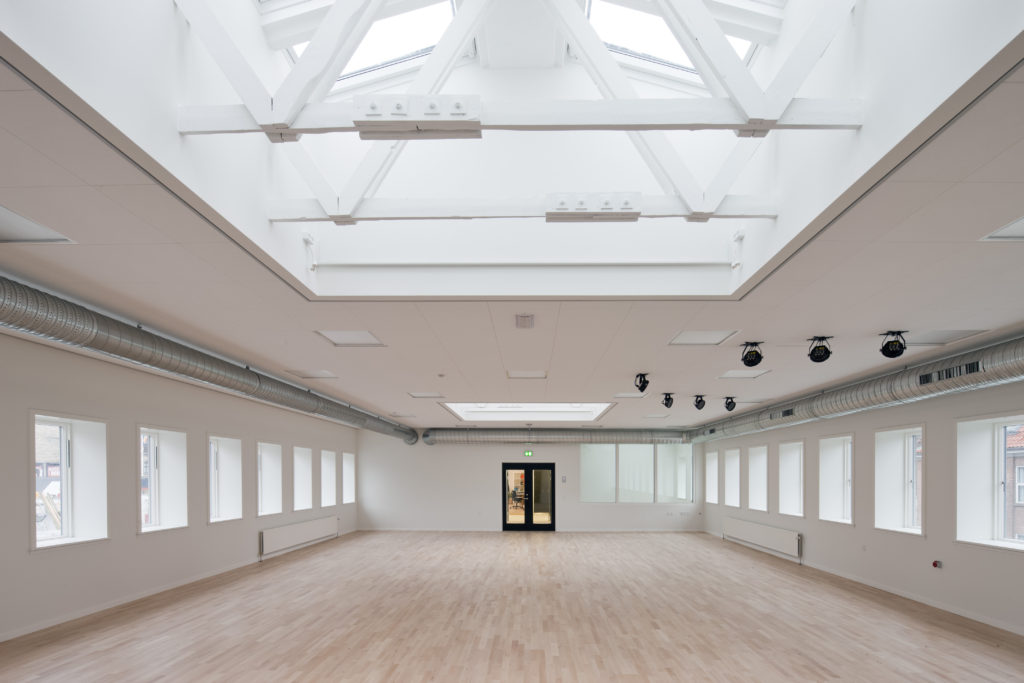 In the Osram Culture Centre project it was decided to use the stack effect by placing roof windows up high in the ridge and cutting a hole in the deck to the ground level thus allowing the effect to work at both levels. In addition, this allows better vertical communication and lets the daylight from south penetrate down to the ground level on the north side of the building.

The new design/lay-out of the rooms has focused on bringing balanced daylight into each room by moving the ground floor access hall from the centre of the building to the north and thereby creating a public climate zone where the diffuse northern light is mixed with »used daylight« through double- glazed panes fitted high in the internal walls between meeting rooms and the new access hall.
The new access hall also solves the challenges of the preservation-worthy north façade by means of an internal glass wall. It does not have the same effect as insulation, but it creates some kind of medium-insulated zone, a transit area. Consequently, the hall does not need full heating and the standard insulation can be avoided that would, otherwise, have spoiled the expression of the old industrial facade. 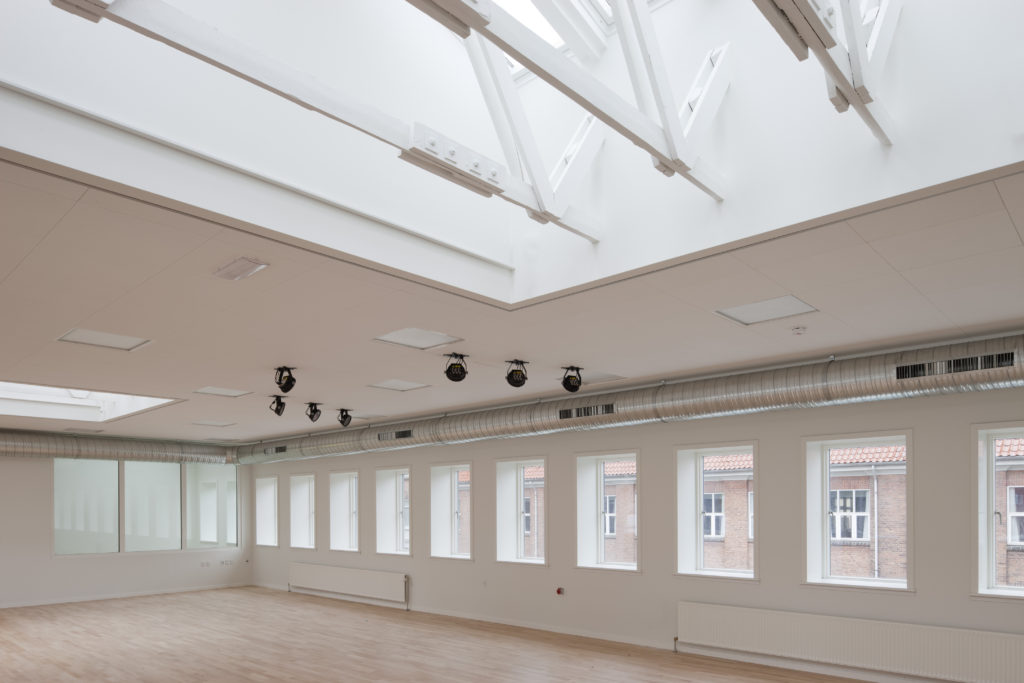 The planned complete solution for natural ventilation for the project Valhalsgade Culture Centre is based on the fully automatic control system NV Advance™ from WindowMaster. The control system NV Advance™ guarantees adequate air change as well as efficient night cooling. It monitors all 28 roof windows incl. sun screening as well as 12 selected VELFAC façade windows. Window opening is controlled automatically to optimize the indoor climate proportional to indoor and outdoor temperatures as well as the use of the building.

The building is divided into a number of ventilation zones each with their own sensors and parameters. In this way the climate in the zones will be monitored individually based on wind direction, wind speed and air pressure on the façade of the zone as well as indoor and outdoor temperatures and CO2-level in the zone. The ventilation zones are controlled dependent on the air pressures on the facades, which are calculated by means of CFD calculations carried out specifically for this project. This results in optimization of the window openings according to 16 different wind directions.

Apart from precise control of the natural ventilation, other systems such as e.g. sun screening, radiators, mechanical ventilators or light control can also be integrated into the system to ensure optimal indoor climate with minimal energy consumption. The project also includes a mechanical ventilation system mostly operating in the ground floor meeting rooms, but also as back-up in other parts of the building in peak periods. The daylighting performance of Osram Cultural Centre has been specified using the daylight factor (DF) as performance indicator. Rooms with an average DF of 2 % or more are considered daylit. A room will appear strongly daylit when the average DF is above 5 %. The renovation has resulted in a considerable increase in DF (see DF visualisations from before and after renovation in the image gallery). 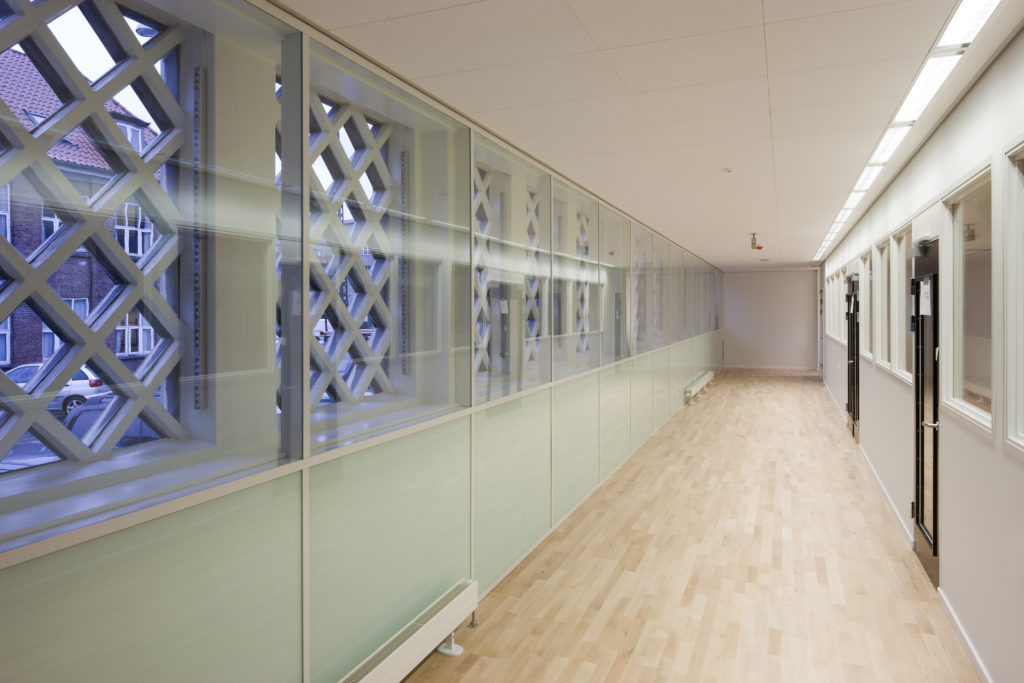 The Osram Culture Centre is a part of the project Neighbourhood Renewal. Neighbourhood renewal is an effort focusing on a defined part of the town and working on its problems and potentialities. Neighbourhood renewal is a kind of preferential treatment of one distinct part of town where local, municipal and governmental efforts are united for 5-6 years to push-start a new and positive process of development. The objective of neighbourhood renewal is to try out the possibilities of accomplishing an effort that will combine improvement of housing and open spaces with improvement of the social environment and cultural life of the neighbourhood. The aim is to turn the trend of development in this part of town, which has experienced increasing social problems and is being physically run-down.

In 2008 the municipality of Copenhagen decided to appoint the Osram Culture Centre in Valhalsgade as spearhead of the city’s environmental goals as well as demo project to be shown during the UN Climate Summit in December 2009. It was essential from the beginning to be in constant and open dialogue with the daily users of the building in order to find the right solutions, which based on the users’ knowledge, incorporated their requirements and dreams together with the energy demands and the indoor climate requirements. 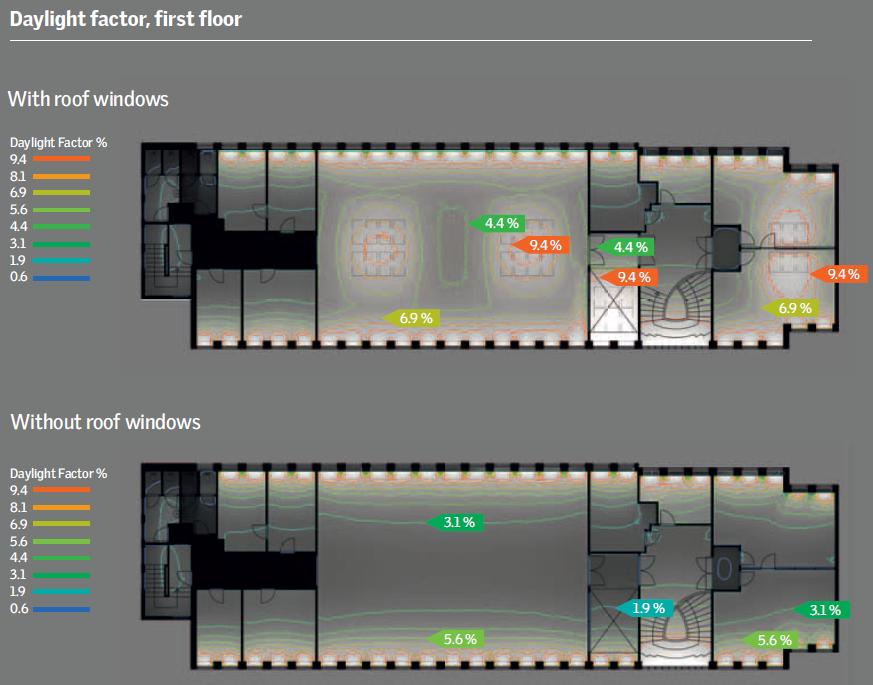 Pia Allerslev, Mayor of Culture and Leisure in Copenhagen, politically responsible for all the city’s buildings and behind the energy renovations, has stated: “The project in Valhalsgade is important for the municipality – and not least the citizens. Here we can see how energy savings can be combined with renovation of a run-down building and provide the building with new qualities. We need this kind of solutions if we are going to solve the great climate challenges and I hope we can transfer these ideas to the many renovation projects, which will be carried out in the coming years.” 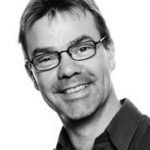 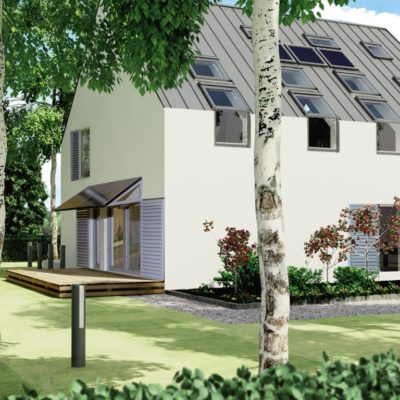